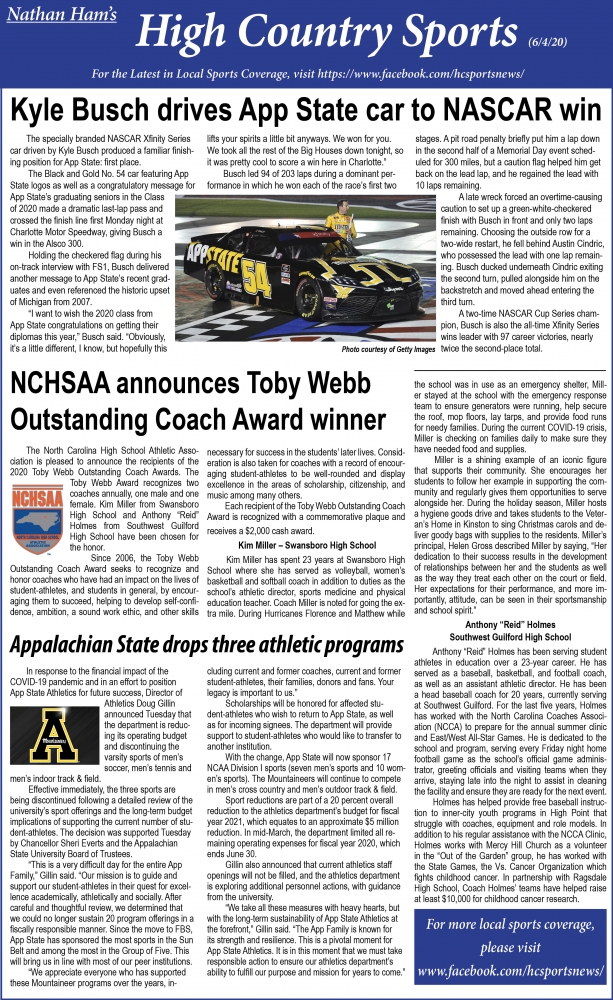 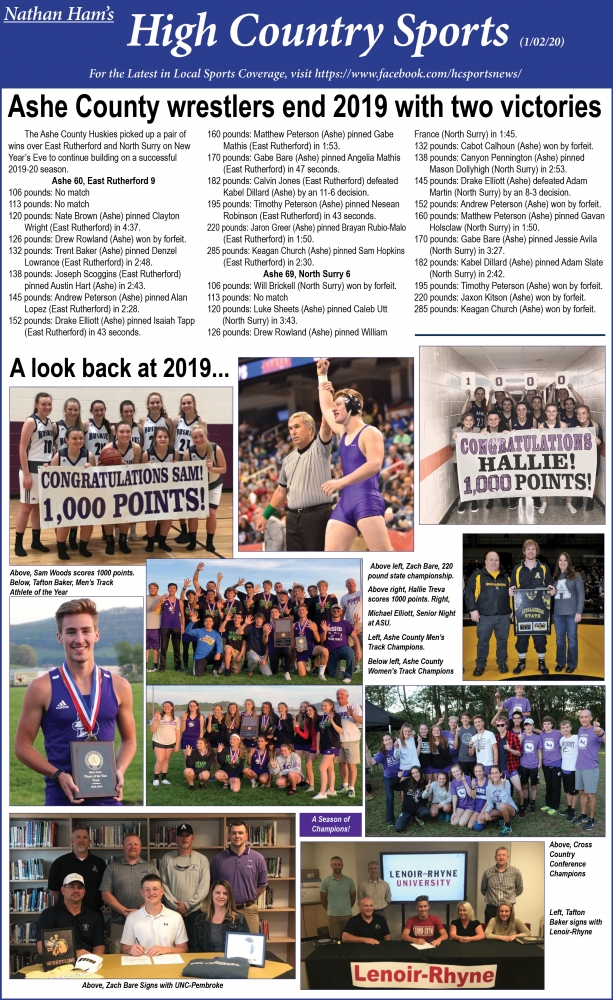 The Ashe County Huskies picked up a pair of wins over East Rutherford and North Surry on New Year’s Eve to continue building on a successful 2019-20 season.

Thanks to a great run to finish the regular season last week, the Ashe County Lady Huskies will share the Mountain Valley Athletic Conference Championship.

Ashe blew out Elkin 62-20 on February 4 and then went to Wilkes Central and picked up a big 54-44 win over the rival Eagles. The ladies closed the regular season with a 52-47 win at home over West Wilkes.

Ashe ended the regular season on a six-game winning streak and with a record of 17-5 overall and 11-3 in the MVAC.

The Lady Huskies shared the conference crown with Alleghany and Wilkes Central who all finished at 11-3. West Wilkes was fourth with a 10-4 record followed by North Wilkes in fifth at 6-8, Starmount in sixth at 4-10, East Wilkes in seventh with a 2-12 record and Elkin in eighth with a 1-13 conference mark.

Ashe County’s Josh Hardin brought home the gold in the 300-meter dash at last Saturday’s NCHSAA 1A/2A State Championships. The senior won the race with a finishing time of 35.35 seconds. Cameron Attucks of Atkins High School was second in 35.56 seconds. This was Hardin’s second straight year winning the 300.

Ashe also had a pair of relay teams that qualified for the state championship. The women’s 4x800 relay team of Zoe Schell, Abby McClure, Malorie Eller and Mahaley Cronk finished 14th with a time of 10:59. The men’s 4x400 relay team was 7th overall in 3:42.

Huskies have 12 wrestlers compete in the NCHSAA 2A West Regional

Ashe County had 12 different weight classes represented in the 2A West Regional with 26 other schools.

Jaron Greer had the best night of all the Husky grapplers, taking home the regional championship at 220 pounds and qualifying for the 2A State Championaship this weekend in Greensboro.

170 consolation round one: Blevins (Ashe) defeated Kyle Thompson (East Wilkes) by an 18-11 decision.

Spring is just around the corner and registration is now open for the first of many running events in the area, the CrossRoads Harley Davidson 5K in Wilkesboro.

The fun run and walk will take place on Saturday, March 28 and anyone interested can preregister or register on the day of the event. The registration fee is $30 and will include a commemorative t-shirt.

All proceeds from the event will go to the High Country chapter of Guardians of the Children, a non-profit group whose mission is to recognize and react to child abuse and educate the public to do the same; to serve as advocates to provide strength and stability to families in crisis; and be an answer to the prayer of an abused child or teen for courage, support and protection.

For the third time this season, Justin Forrest drained a three in the closing seconds as App State men’s basketball overcame an 18-point first half deficit in a 60-57 comeback victory over Texas State on Saturday afternoon.

Forrest has also drained a game-winning trey against Georgia Southern on Jan. 4 and hit a three to force overtime against Arkansas State on Jan. 16. He finished with 14 points, four rebounds and a career-high seven assists.

O’Showen Williams tallied a game-high 19 points, while adding five rebounds and a pair of steals. Hunter Seacat added a near double-double with 10 points and nine rebounds. Isaac Johnson chipped in with eight points and six rebounds. Johnson now has 905 rebounds in his career and is just one five players in program history to pull down 900 or more rebounds in his App State career.

Texas State pushed its lead back to nine points in the second half, before App State got baskets from Williams and Seacat to pull within 53-48. Following a Bobcat basket, App State scored the next nine points, capped off by a basket from Johnson, to take a 57-55 lead with 1:52 left. Texas State tied the score on its next possession, but Forrest’s clutch three in the closing moments secured the Mountaineers victory.

The Black and Gold held a 37-28 edge in rebounding, including an 11-5 advantage on the offensive glass. The Mountaineers also outscored the Bobcats 18-5 on the fast break.

Mason Harrell and Caleb Asberry each had 11 points for the Bobcats, while Marlin Davis dished out a game-high 11 assists.

App State will hit the road for a pair of key conference games next weekend. The Mountaineers play at Georgia State on Thursday at 7 p.m. and Georgia Southern on Feb. 15 at 4 p.m.

Starmount was led by Katlyn Walker’s 14 points. Emma Freed and Olivia Gwyn each had seven points and Tanna Sagraves had four points.

Ashe is 13-5 overall and 7-3 in the Mountain Valley Athletic Conference.

Last week the Huskies took on Starmount and North Wilkes and came away with a pair of defeats as the regular season is quickly coming to a close.

On Monday, Starmount traveled to West Jefferson and came away with a 72-55 win. Ashe held a 16-15 lead after one, but the Rams exploded for a 27-point second quarter and outscored Ashe by 14 to take the lead and never look back.

On Friday, Ashe tried to cap off the season sweep of North Wilkes, but the Vikings rallied from a 25-16 halftime deficit to earn a 45-42 win.

Ashe County ended the week with a 6-12 overall record and a 4-6 mark in the Mountain Valley Athletic Conference.

‘On the Road, On the Water, Don’t Drink and Drive’ Campaign begins Memorial Day Weekend