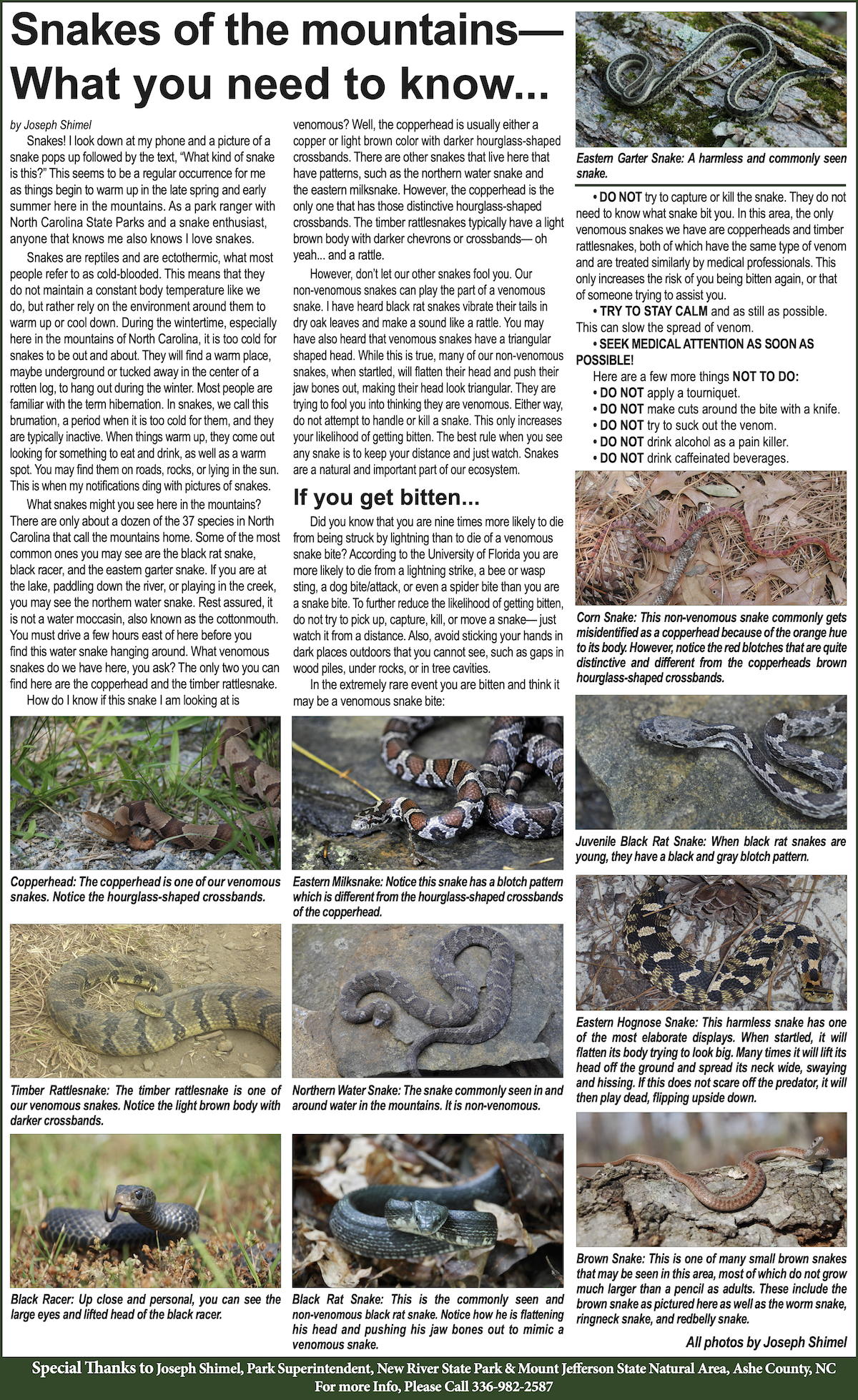 Snakes of the Mountains

What you need to Know!

Snakes! I look down at my phone and a picture of a snake pops up followed by the text, “What kind of snake is this?” This seems to be a regular occurrence for me as things begin to warm up in the late spring and early summer here in the mountains. As a park ranger with North Carolina State Parks and a snake enthusiast, anyone that knows me also knows I love snakes.

Snakes are reptiles and are ectothermic, what most people refer to as cold-blooded. This means that they do not maintain a constant body temperature like we do, but rather rely on the environment around them to warm up or cool down. During the wintertime, especially here in the mountains of North Carolina, it is too cold for snakes to be out and about. They will find a warm place, maybe underground or tucked away in the center of a rotten log, to hang out during the winter. Most people are familiar with the term hibernation. In snakes, we call this brumation, a period when it is too cold for them, and they are typically inactive. When things warm up, they come out looking for something to eat and drink, as well as a warm spot. You may find them on roads, rocks, or lying in the sun. This is when my notifications ding with pictures of snakes.

What snakes might you see here in the mountains? There are only about a dozen of the 37 species in North Carolina that call the mountains home. Some of the most common ones you may see are the black rat snake, black racer, and the eastern garter snake. If you are at the lake, paddling down the river, or playing in the creek, you may see the northern water snake. Rest assured, it is not a water moccasin, also known as the cottonmouth. You must drive a few hours east of here before you find this water snake hanging around. What venomous snakes do we have here, you ask? The only two you can find here are the copperhead and the timber rattlesnake.

How do I know if this snake I am looking at is venomous? Well, the copperhead is usually either a copper or light brown color with darker hourglass-shaped crossbands. There are other snakes that live here that have patterns, such as the northern water snake and

the eastern milksnake. However, the copperhead is the only one that has those distinctive hourglass-shaped crossbands. The timber rattlesnakes typically have a light brown body with darker chevrons or crossbands— oh yeah... and a rattle.

However, don’t let our other snakes fool you. Our non-venomous snakes can play the part of a venomous snake. I have heard black rat snakes vibrate their tails in dry oak leaves and make a sound like a rattle. You may have also heard that venomous snakes have a triangular shaped head. While this is true, many of our non-venomous snakes, when startled, will flatten their head and push their jaw bones out, making their head look triangular. They are trying to fool you into thinking they are venomous. Either way, do not attempt to handle or kill a snake. This only increases your likelihood of getting bitten. The best rule when you see any snake is to keep your distance and just watch. Snakes are a natural and important part of our ecosystem.

If you get bitten...

Did you know that you are nine times more likely to die from being struck by lightning than to die of a venomous snake bite? According to the University of Florida you are more likely to die from a lightning strike, a bee or wasp sting, a dog bite/attack, or even a spider bite than you are a snake bite. To further reduce the likelihood of getting bitten, do not try to pick up, capture, kill, or move a snake— just watch it from a distance. Also, avoid sticking your hands in dark places outdoors that you cannot see, such as gaps in wood piles, under rocks, or in tree cavities.

In the extremely rare event you are bitten and think it may be a venomous snake bite:

• DO NOT try to capture or kill the snake. They do not need to know what snake bit you. In this area, the only venomous snakes we have are copperheads and timber rattlesnakes, both of which have the same type of venom and are treated similarly by medical professionals. This only increases the risk of you being bitten again, or that of someone trying to assist you.

• TRY TO STAY CALM and as still as possible. This can slow the spread of venom.

Here are a few more things NOT TO DO:

• DO NOT apply a tourniquet.

• DO NOT make cuts around the bite with a knife. • DO NOT try to suck out the venom.

• DO NOT drink alcohol as a pain killer.

• DO NOT drink caffeinated beverages.